With the use of Augmented Reality we wanted to improve the dangerous and tedious way of navigating while riding a bicyle.

The goal was to bring the view back to where it belongs ... on the road and not on your phone. 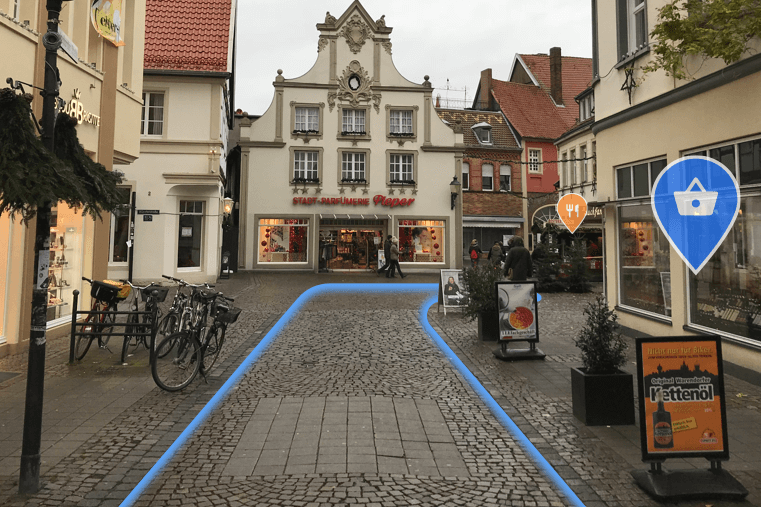 NAVision is a project of the third semester in the winter term 2017/18 and was developed by Nadine Edler, Elena Feuerstein and Jan Meininghaus. The topic was "Mobility in the life of people.

After some research on this subject, it was clear that there is currently a major problem with navigation on the bicycle and that possible approaches that try to solve the problem continue to raise problems.

Navigation systems attached to the handlebars are often seen as the solution to the problem. However, it is noticeable that when looking down on the handlebars, the cyclist is inattentive for a short time and does not look ahead. If the rider looks down for just one second, there is a great risk that a car door could open at the same time and the cyclist would not even be aware of this.

The logical solution would be to move the navigation away from the periphery of the cyclist (handlebar / mobile phone) and into the field of view.
And exactly this was realized with NAVision. NAVision is a system that allows the cyclist to always have his view on the road, while still having all important route information displayed.

The plan for the prototype was that the route is dynamically rendered using live map data and not just statically displayed. This data is then displayed as a blue line that borders the road laterally to indicate the direction. First concept graphics looked promising and showed us that it is possible.

From there it was clear that this was something with definite potential. With the help of the bicycle manufacturer Riese & Müller from Weiterstadt we found a great partner who supported us with important information.

In order to pack the technology properly, it was decided to integrate the technology into a helmet and from there the pictures were transferred into spectacles. A concept was also developed for this element, which should give an approximate idea of the overall concept:

NAVision is a project that can be implemented sooner or later. Since the cost for the products of the parts is simply too high at the moment, the further development must definitely be delayed for at least 5 years. However, it is conceivable that such a product will appear on the market in the next few years.

To complete our project, a small trailer was also produced to illustrate the rough functions of NAVision: